Hvar – one of the oldest towns on the Adriatic. Founded by the Illyrians, taken by the Greeks and brought to glory by the Venetians. Today, Hvar is undoubtedly one of the most popular Summer destinations in Europe. Whether your image of a perfect holiday is a relaxing day on the beach, exploring a rich history written in stone, or partying the night away, Hvar truly has it all.

But how did the Sunniest Place in the Adriatic (and we really mean it when we say this as Hvar Town counts approx. 2724 sunny hours per year) become the hottest place to visit? Let’s take a look back in time! 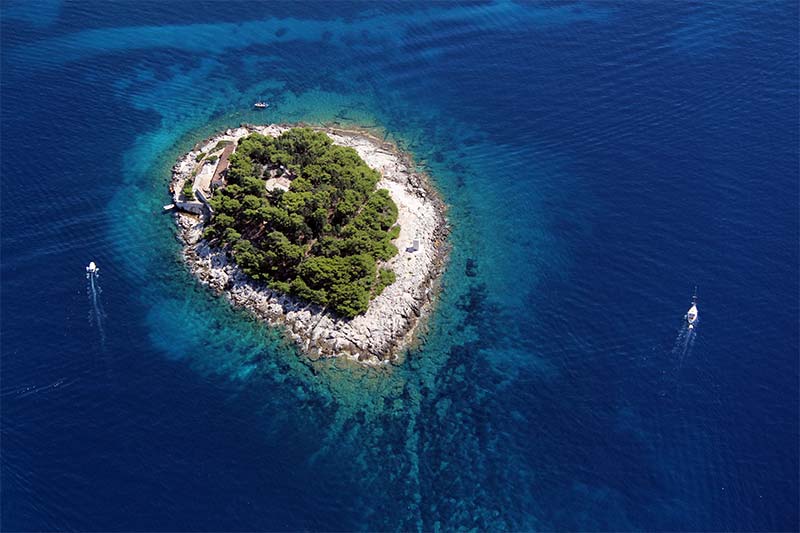 Sometime in the first millennia B.C., a tribe of Illyrians, the first Croatians in the area, built a small fishing settlement and lived there in peace for several centuries. It wasn’t until the 4th century B.C. when Greek settlers first showed up, colonized the island and started building upon the already existing villages, soon expanding them and giving them the outlines of what they are today. The most notable thing that the Greeks and the Romans, who were also present in the area around the 2nd century A.D., left behind, is perhaps the art of agriculture and, to the great delight of Croatians and visitors alike, a world-famous tradition of wine making. To this day, the island of Hvar is riddled with vineyards, some still in the old Greek fields, and finding a wine tasting tour is no trouble at all!

We have the Venetians to thank for modern day Hvar. They took over Hvar town in the 13th century A.D. and very quickly, due to a very desirable geographical position of the time, moved all of the administration of the empire. This meant that Hvar town very quickly became a hugely important location, and as such experienced a long period of expansion and general well being. This is also when the Španjola fortress (or as it is sometimes referred to, Fortica) was built and is still standing on the hill overlooking the port as an ancient and silent protector. 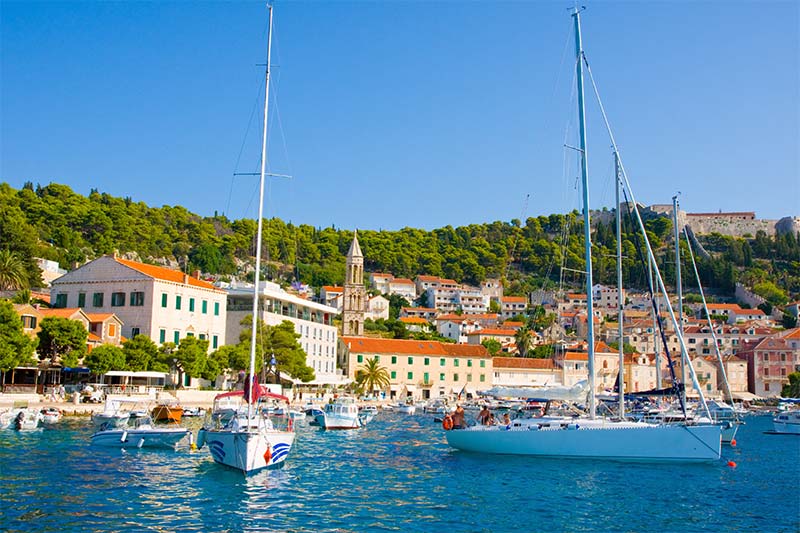 This very fortress saved the people of Hvar shortly after its completion. The Venetian empire had a rival and a long-standing enemy in the form of the Ottoman empire, which was also trying to expand at the time and the two were often attacking each other, wrestling for supremacy on the Adriatic. One such attack happened in Hvar town as well, on 1571. A.D. when a fleet of Ottoman ships raided the town and almost completely burned it down. Luckily, all of the locals managed to escape to the fortress and hid there until the danger passed. They were able to rebuild fairly quickly and, apart from an incident in 1579. Where gunpowder exploded in the fortress and caused mass damage in the town, Hvar town spent the rest of their time under Venetian rule in relative peace and calm.

For the next several centuries, quite a few empires were ruling over Hvar, most notably the Austrian-Hungarian empire, but due to Hvar island slowly losing its strategic importance as time went on, it eventually became one of many forgotten, decaying towns on the Adriatic. 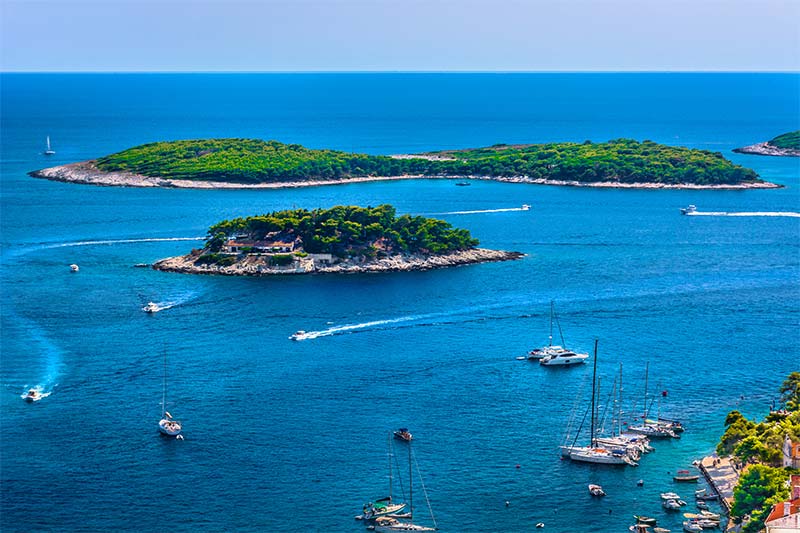 This all changed in 1945. When the first hotel in Hvar was built. Ever since then, this picturesque town has been deemed paradise on Earth and in the Summer months is absolutely swarming with super yachts, curious explorers and traveling party goers.

What is there to see, you might ask? Why should Hvar be one of the places you absolutely cannot miss on your travels? Why not climb the Španjola fortress, explore its dungeons and enjoy the iconic and breath-taking views from it’s walls? If climbing a hill sounds like too much work, then you will definitely enjoy walking down St. Stephen’s square, the largest square in Dalmatia, and sitting down at one of the many restaurants or bars located there to relax over a cold drink or some amazing, local food. 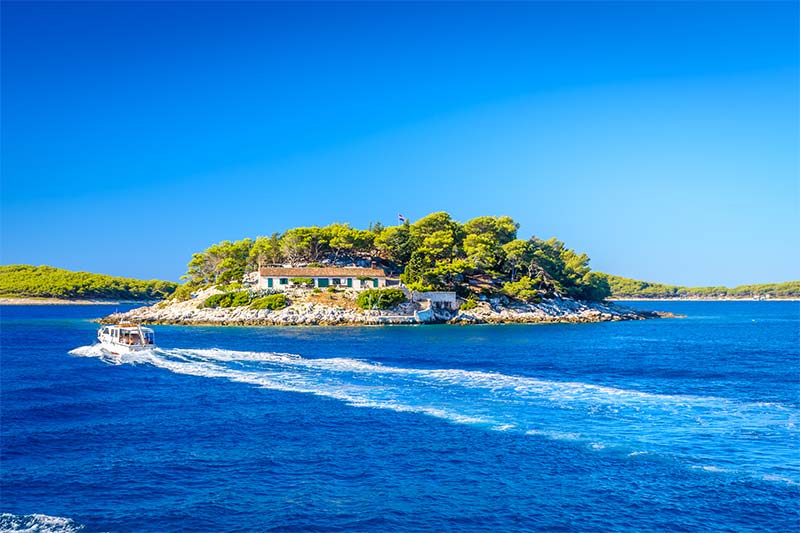 Check out the first communal theatre of Europe situated on top of the arsenal where the locals repaired their ships for generations, relying on them to safely allow them to ride the waves whether it be for fun or to keep the still going tradition of fishing every day.

Want to relax on a beach but in peace and quiet, away from the bustling city beaches? Hop on a water taxi and visit one of the surrounding Paklinski islands and disappear under the natural shade of tamaris trees as the salty smell of the sea fills your lungs. 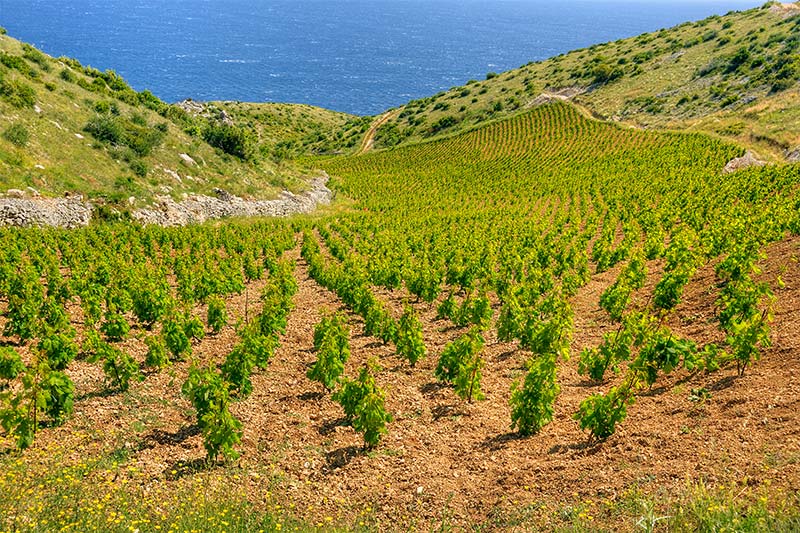 Sounds too relaxing for you? Want to party the night away like never before? Hvar town is known as being the party capital of Croatia, and as such you will be able to enjoy many free entrance bars dotting the coast, or jump on a small boat filled with like minded party goers and dance your night away under the stars in the world-famous island night club Carpe Diem.

Whatever it is you imagine your perfect holiday to be, Hvar has it all! After all, the never-ending stream of visitors, both past and future, celebrities, young people looking for endless fun and well-traveled individuals from all over the world must be onto something.