If you ever find yourself in a mood to visit a small place with some nice beaches and beautiful architecture, then the walled town of Korčula is the right place for you. Located on the island bearing the same name, this place is located on the bottleneck between the island and Pelješac peninsula, overlooking a historically very important trading route.

This town has everything, the remains of medieval walls, ancient town gates, old churches and even what might be the house where Marco Polo was born. So, beaches, old buildings and fascinating legends, a perfect mixture for an interesting, but still relaxing, vacation. Although it is not as popular as some other islands on our coast, it is really worth your time, and if you like places with fewer people, this might be the one for you. 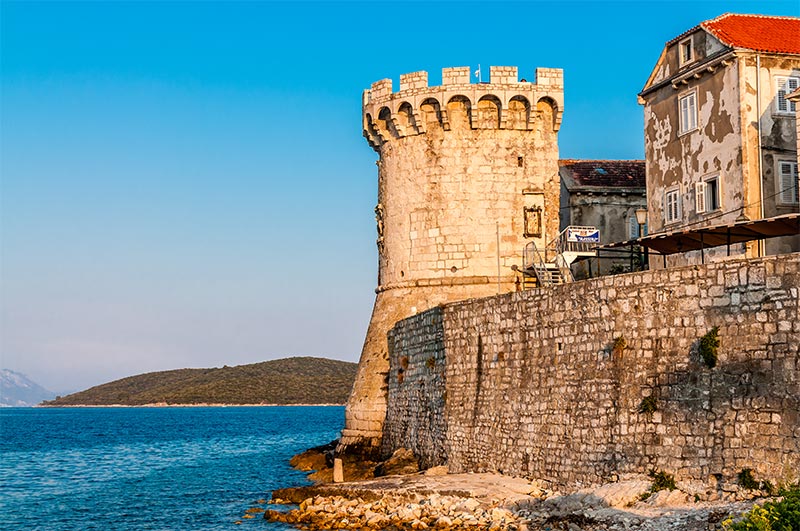 The island of Korčula is located in the southern Adriatic; around 46km long and covers an area of 276 square kilometers. In the ancient times it was known as Korkyra Melaina (Greek for Black Korčula) due to its dark holm oak and pine forests. There are a couple of towns to visit here, most famous of them being Korčula town, also called Little Dubrovnik due to its similarity to Dubrovnik’s old town. Furthermore, if you are looking for an even more secluded vacation, you can go to any of the many smaller towns or villages located on the island.

The aforementioned house of Marco Polo, it is located in the Korčula town, just off the main square. In this town you will find numerous things named after him, as people of Korčula take this part of their heritage, however unconfirmed it may be, very seriously.

The Old town itself, located on the small peninsula, originates from the 13th century and it was built precisely in a shape that protects it from the sea winds. The streets are misaligned, in a very specific fish bone pattern, stopping the damp southern winds from entering the town, and letting the dry northern winds to pass through. This acts as a sort of air-conditioning for the town, as it is never to hot here, even in the scorching summer months. Its stone houses with their orange roofs are a remarkable sight from a nearby hill. 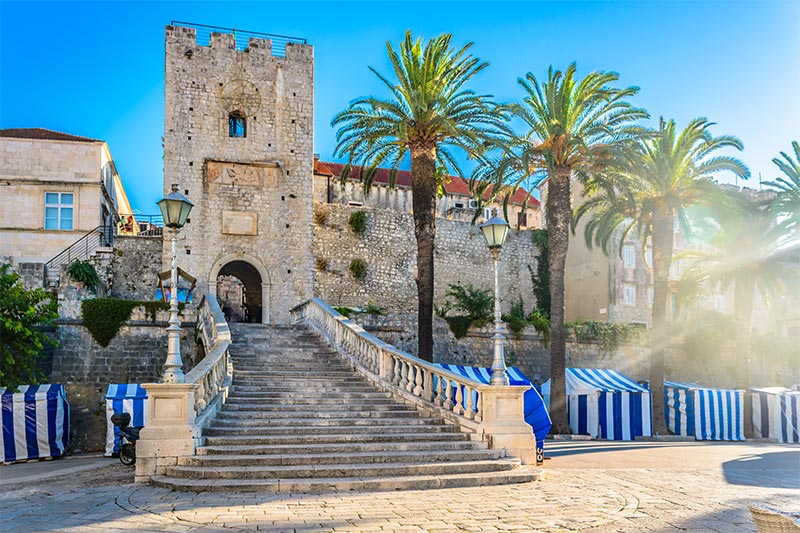 The main entrance to the town is through Kopnena vrata (the Land gate) located on the southern side. The triumphal arch is on its front built to honor Leonardo Foscolo, probably the most important commander for the defense of Dalmatia during the 17th century. If you are in for a scenic view you can climb the Revelin tower that is just near this gate. Another entrance is on the west side, called Morska vrata (the Sea gate). In addition, inside this town you will find exactly nine churches, and each of them is worth your time. The most famous one is in the center of the Old town, the Katedrala sv. Marka (St. Mark’s cathedral). It was built in many stages, from the 11th and 16th century, and therefore offers a layered overview of the development of art and architectural styles throughout the ages. Its entrance has a statue of St. Mark overlooking it, with Adam and Eve on its sides. Marko Andrijić built the main altar with the ciborium over it. The bell tower of the cathedral also offers a fantastic scenic view, if you can bear the narrow, windy stone staircase that leads to the top of it.

Other buildings that you really should visit are Opatska riznica (Abbey treasury), built in 17th century, and located in a building that once was the Bishop’s palace. Moreover, you should also go to the town museum where they have a large collection from which you will learn even more about the history of this place. The town museum is located in a building that was once the palace of the Gabrielis, a famous family of Korčula. 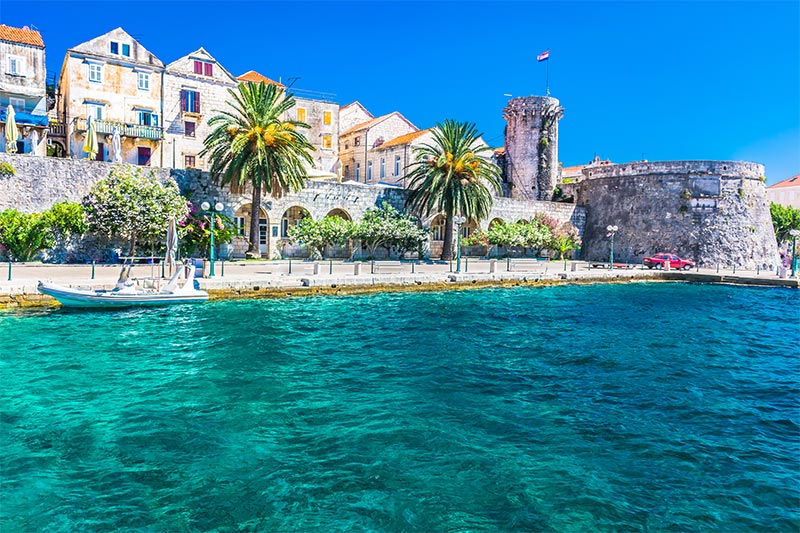 Once you decide to go for a swim there is plenty of choice here. Korčula has many smaller and secluded beaches where privacy is ensured. However, the most popular beaches here are sandy beach Vela Pržina in Lumbarda and pebble beach Pupnatska Luka. If the beach that you want to visit is a bit far away you can always find a taxi, a local bus, or, for those in better shape walking or cycling are also viable options. In addition, for the cultural part of your vacation, you must be here for the Moreška sword dance, the dance that used to depict the battle between the Moors and the Christians. Today, this unique form of dance-fighting shows a struggle between the armies of White and Black king, and it is performed every week. This tradition is nurtured by the local society, and many young men from Korčula take part. Whatever you decide to do, one thing is for sure, you will learn and see a lot while visiting Korčula.